In a comment on STCOR-306, Massoud M. ALShareef wrote:

When you add/ edit a user record, the date format dialog box is forced to use the Hindu Numerals, and there is no option to select the Arabic Numerals instead. FOLIO currently does not support Hindu Numerals in date fields. For those of us who do not know the difference between the two numerals formata: Arabic numerals are the numbers used with latin languages (I.e. 1 2 3 4) and Hindu numerals are the shapes that are used with ancient Arabic/ Urdu / Faris text (see attached screenshot named: 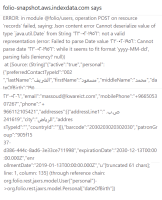 It is highly recommended to use the default Windows Numerals formats (Arabic, Hindu or Contextual) and to treat Hindu numerals within FOLIO as numbers as the Arabic numerals, in case Hindu format is in use by default.