Purpose: to filter out the property value of terms on public feeds, specifically discovery systems.

This is controlled at a license term value level and will require addition to the license term edit UI for users to be able to set the Visibility of the term value as either Public or Internal. 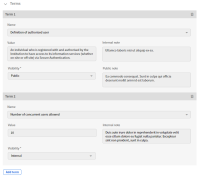